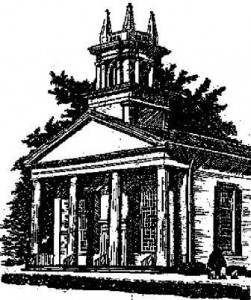 Our church was born in 1730 as an assembly that convened weekly for the worship of God. The church leased a 220-acre tract in 1737, and built a meeting house in 1738. Itinerant preachers provided worship leadership until the church called its first resident pastor in 1761.

During the Revolutionary War, the church became an arsenal and barracks, and a meeting place for the patriots. British troops destroyed the parsonage and storehouse in early June 1779, and burned the church to the ground shortly after. There is a monument in front of the church, celebrating the all-black First Rhode Island Regiment, which figured prominently in the British raid on Yorktown in 1779.

After the war, the church constructed the second building on this site, in 1785.

The present building replaced the 1785 structure in January 1840. Worship and Sunday School services were held in this one building until 1930.  Since then, there have been numerous building additions.  In 1985, the church restored the 1840 Sanctuary to its original appearance. In 1998, the church expanded the Christian Education Building, and created a passageway between the CE Building and the original Sanctuary.

The History of our Congregation

These more recent articles have been published in issues of The Disciple or on our blog. Most of them were written by Dick Hunter, the Church Historian. All church history articles.