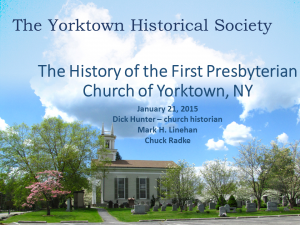 Our church is about 285 years old, as of 2015. Highlights of our history were presented by Dick Hunter, Mark Linehan, and Chuck Radke at a Yorktown Historical Society talk on January 21, 2015 in our sanctuary:

Click on the image above to see the presentation charts; a version with notes is also available. If you’re interested, you can review an online collection of FPCY historical images and records.