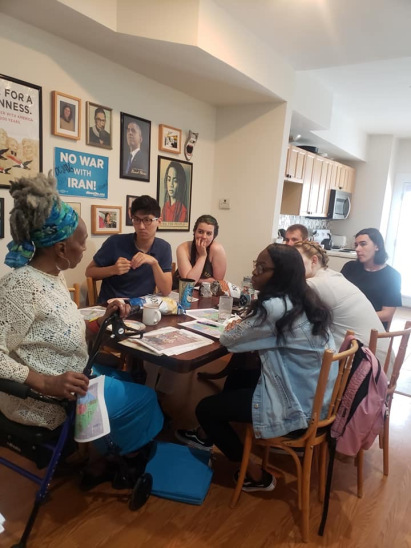 A life-long resident and community organizer in D.C., one of the first things Debra told us was to never use the word gentrification. “It’s displacement,” she said emphatically. Displacement: because of intentional choices the city and real-estate developers have made to “improve” certain neighborhoods to make money, people have been forced to leave their homes, neighborhoods, and family businesses because they can’t stay afloat there anymore. As we rode down the street, Debra noted the hip bars and the Whole Foods, invited others on the streetcar to confirm or add to what she was saying, and told us what had been there before developers had turned their eyes to the H Street corridor in NorthEast D.C., the street off which we, the YAVs, live.

Read about Langley’s first week in DC on her blog.

On August 25 we commissioned Ailih Weeldreyer and Langley Hoyt as Young Adult Volunteers, who will both be serving in Washington, D.C.

The Young Adult Volunteer (YAV) program is an ecumenical, faith-based year of service for young people, ages 19-30, in sites around the world and in the United States. YAVs accompany local agencies working to address root causes of poverty and reconciliation while exploring the meaning and motivation of their faith in intentional community with peers and mentors. YAVs serve during the academic year, August to July.