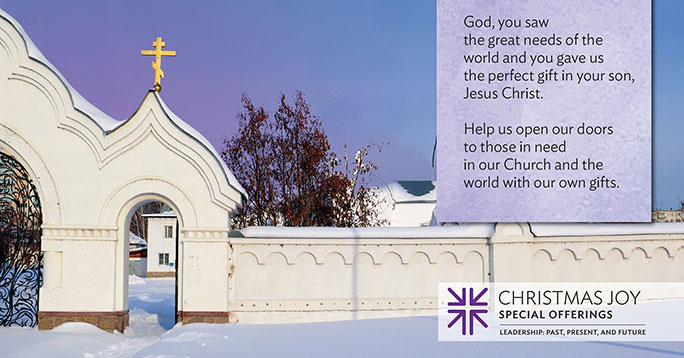 You can give to the Christmas Joy offering using the special envelope, marking your check or gift “Christmas Joy,” or online.

Grocery shopping had become an anxiety-filled experience for the Rev. Gloria Casasus-Urrutia. Ten years after her 2006 retirement as organist at her church, Porta Coeli in San German, Puerto Rico, she found herself thrust into severe financial hardship. “I had to write down the price of each item and add everything up to make sure I had the money.” I bet there are probably people in this room who know what that feels like, and it’s not good.

Her situation forced her to move four times over two years, and she struggled to find a safe and affordable place to live. Then, to make matters even worse, Hurricane Maria struck. As we’ve all heard, much of Puerto Rico was devastated, and it isn’t hard to believe that Gloria was beset by a bevy of mental anguish and physical problems. “I had a panic attack, I had bronchitis, my arm was dislocated, and as if that wasn’t enough, my puppy had to be hospitalized for several days.”

But as a woman of faith, she was never in total despair. “I suffered a deep depression, but there was something that was not affected — my faith and trust in the God of love and mercy that we preach so much.” She prayed for people who suffered severe setbacks from the storm and gave thanks for the meager provisions she had.

But soon, God opened a door. Isn’t that so often the way? Gloria became aware that help might be available when she contacted the church’s Board of Pensions seeking an income certification letter so she could apply for government benefits. Her pension was small because she entered ministry later in life and served small congregations with limited financial resources. Maria Perry, a Board service specialist, took note of
Gloria’s extremely modest income and urged her to apply to the Assistance Program.

“I saw light at the end of the tunnel,” Gloria said. Her life was about to become less of a struggle thanks to a grant from the Assistance Program of the Board of Pensions. The Assistance Program is supported by gifts from congregations, just like ours, to the Christmas Joy Offering.

Gloria says her life “has taken on a new turn.” The grant enabled her to get her car fixed, and her grocery shopping is no longer such a worrisome chore. Gloria is so grateful for the gifts to the Christmas Joy Offering and for the Assistance Program of the Board of Pensions they support. Gloria especially wants her Presbyterian
family to know that she faithfully places her tithe in her congregation’s offering plate to share the blessings that she received. She said the generosity of Presbyterians and the work of the Board of Pensions bears witness to the care of the “Good Shepherd.”

The offering also supports Presbyterian-related schools and colleges equipping communities of color. If we all do a little, it adds up to a lot!

Indeed it does.
Let Us Pray ~
From a humble birth,
your perfect gift was given.
We offer our humble gifts in response,
that your power and grace might
magnify them to meet the needs
of those who serve your church
and your world.
Amen.