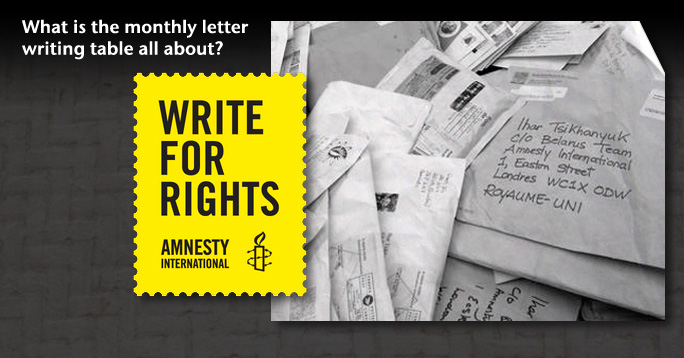 As part of our Peace and Justice Ministry, on the second Sunday of each month we write letters to advocate for those individuals whose basic human rights have been violated as stated in the Universal Declaration of Human Rights of Dec. 10, 1948.  In our effort, we join others from some 150 countries who are also concerned about human rights.

When these letters are received by the offending authorities, they quickly realize that their actions are witnessed by a large part of the world.  The optimum result, of course, is redress.  This was the case for Meriam Ibrahim of Sudan, who had been sentenced to death for apostasy for declaring to be Christian.  More than a million people took action, including members of this congregation, and she was eventually released and allowed to leave the country and move to the U.S.

If immediate success is not achieved, at least the offending authorities are aware that the world is watching and that people care.  It is important to speak out.  You are invited to participate in this mission.