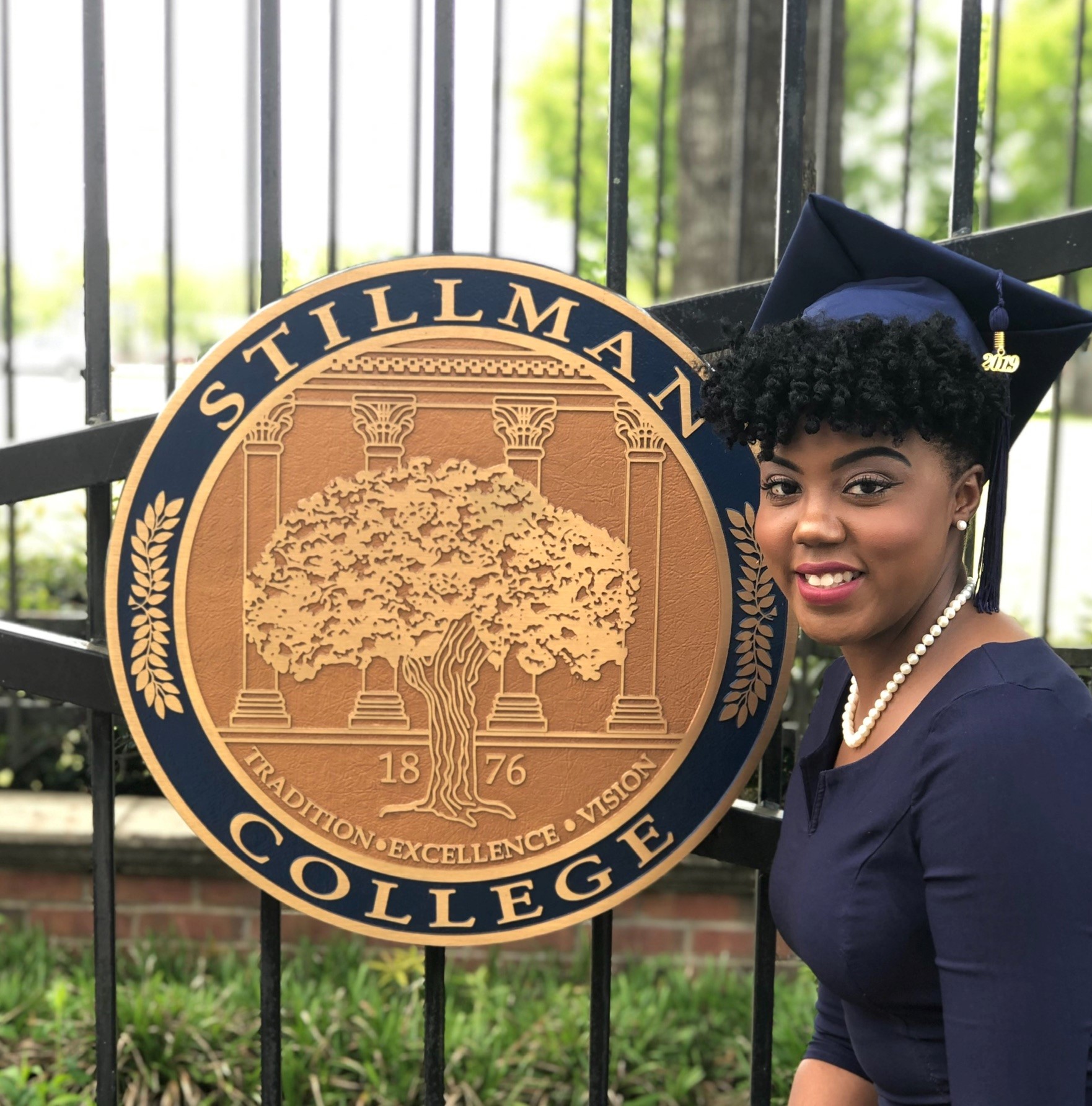 2015 was supposed to be a big year for Rose Bryant, with positive changes for her and her son. It ended up being just that — but not like she expected, and it all began with disappointment.

“A new work opportunity was supposed to open up so many doors for me,” she said. “I worked for AT&T and was in manager training to open my own store. I’d started a tuition reimbursement program so I could go back to school. But then, weeks into it, my manager calls me in and says, ‘I thought you had a bachelor’s degree but you don’t.’ I couldn’t stay in the program or run the store. The moment made it all very tangible — how not finishing school was impacting my growth.”

Knowing she had to take a leap of faith, Bryant resigned from her job. She needed money but, after years in retail, wanted something that would allow her to spend more time with her son. She decided to be a substitute teacher, which meant getting her transcript from Stillman College in Tuscaloosa, Alabama.

Bryant had attended the school in 2003 but wasn’t really sure what she wanted to do, so she left. A few years later, she found out she was pregnant and had to keep working to support her son — setting aside her dream of finishing college. That all changed in 2015.

“It was like divine intervention happened,” Bryant explained. “I went by the school to pick up my transcript, and one of my professors recognized me and asked if I was coming back. I said, ‘No, I’m trying to get a new job,’ but he wouldn’t let it go. He wrote something on a [sticky note], folded it up, and asked me to take it to admissions. As I was walking across campus, I was feeling annoyed, thinking it was something about my transcript.”

That note pointed to a grant that Bryant could qualify for that would cover summer classes.

“The admissions staff asked, ‘Don’t you want to finish your degree?’ They encouraged me to take just two classes and if it wasn’t for me, I didn’t have to come back in the fall,” she said.

The financial aid covered the classes, which she took online. She got A’s in both and says that boosted her confidence enough for her to believe that she could earn her degree.

“Everything flowed from there. I went back to school in the fall, changed my major to education, and was getting straight A’s,” Bryant said. “Each time I thought I would not be able to make this work financially and would have to give up, it was as if divine intervention would again happen for me.”

Bryant grew up in Tuscaloosa and could walk to campus if she wanted. Her great uncle, Amos Hubbard, had once been the Dean of Students at Stillman, a school founded in 1876 by a Presbyterian pastor, the Rev. Dr. Charles Allen Stillman. (Hubbard turned 90 this year.) Not long after starting school again, Bryant ran into her high school choir teacher, Jocqueline Richardson, now leading the renowned Stillman College Choir, who asked her to join. That accidental meeting would be the second time help arrived when Bryant needed it most.

“I was nervous when I walked in during their warm-up and started singing,” she said. “But then a person next to me said,  ‘You sound great,’ and so I began to sing with them. As I started my second semester, I was unsure how I could pay for it, but then I got a choir scholarship. Again, everything just fell into place — this is where I was meant to be.”

Bryant became active on campus serving on the Student Government Association, first as treasurer and then later as president. She worked to solve problems for students, including improving how they received work study payments and tackling housing issues that she and other single mothers faced.

“I was always on campus and I always had my son. We were struggling with finding affordable housing,” Bryant explained. “I had $7,000 left from scholarships, but I couldn’t use that off campus and I couldn’t live on campus as a single mom. [Stillman College President] Dr. Cynthia Warrick realized there was an influx of nontraditional students who had children, a need that was not being met. All of us had housing issues and were still making good grades; we just needed a little help.”

A plan was made to turn a former professor’s campus home into a home for single mothers. Bryant was able to move in during her junior year, along with two other mothers who had infants. Finally, in 2019, Bryant graduated with a bachelor’s degree in education. She did so well that she landed a job three months before finishing school. She now works as a seventh-grade English and language arts teacher for the Dallas Independent School District in Dallas, Texas.

Bryant credits that, in part, to the financial aid received through programs like the Christmas Joy Offering. The Offering supports Presbyterian-related schools and colleges equipping communities of color like Stillman.

“That support not only kept me in school, but it allowed me to take part in programs during the summers,” Bryant explained. “I went to cities like Boston and Washington, D.C., and learned from people at places like Johns Hopkins University. I helped create a special education curriculum at an Indiana public school district and took part in teacher development programs in Minnesota. I was exposed to new ideas that made me not only more marketable, but more well-rounded.”

Bryant doesn’t want people to overlook the importance of schools like Stillman College to those who attend classes.

“Give as much as you can because it always helps,” she said. “Stillman is a place where those who live way out in what we call the Black Belt of Alabama can experience new things and grow in a way that’s not overwhelming. That includes people who, like my great grandmother, have never been to a Walmart or Target. Just because we come from a poorer background doesn’t mean we don’t have the capability to the do the work or that we don’t have the rigor. But sometimes you don’t know what you don’t know until you have the opportunity to learn.”

2020 is already a big year for Bryant. She’s not only doing what she loves, but she’s engaged (her son, Aaron, who is now 13, helped with the proposal), and she just bought her first house.

“I don’t think I would be here without the support of Stillman,” said Bryant. “The amazing thing is that all of this has a ripple effect. I was able to finish my goal because of the support I received, and I know of at least six people who came directly to me about how they could do the same, including my younger sister.”