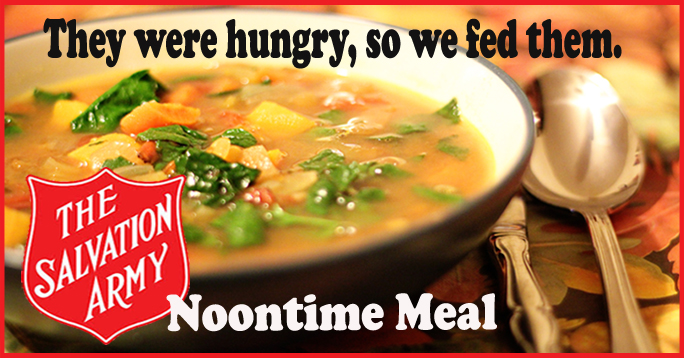 Andy Mavian, the current volunteer coordinator of the monthly Noontime Meal that is provided by our church, first got involved in this ministry the same way that many of us have gotten involved in the things we are involved with…he was asked if he could step in as the coordinator and he said yes.  He enjoys being involved with the meal because he lives in Peekskill and wanted to serve his local community, and he is able to fit this ministry into his regular schedule.  An added benefit that Andy has found is being able to meet and work with other members of our congregation.

Lately, the shopping has been done by either Ruth Deemer or Pat Prauda. In December Pat shared a heart-warming story with the congregation about a recent shopping trip during which she was talking with a man in front of her on the checkout line. During the conversation she told the man that she was shopping for the meal that would be provided to the clients of the Salvation Army. The man finished paying for his groceries, and when Pat had finished having her groceries scanned the man returned and paid her bill in its entirety and asked for nothing in return.

The meal preparation is a group effort that involves 8 to 10 volunteers from a base that has included the likes of John Collins, Pam Darreff, George Forbes-Freeze, Dick Hunter, Bruce Johnson, Mary-Lou McArdle, Dick & Squeegee Mills, Jerrie Pospisil, Jocelyn Ramage, and Ken Sherman. (Apologies to anyone not mentioned.) It is a fun and lively group, so the hour or two it takes to prepare everything passes quickly. We have been fortunate to have Lynda Spring and Marleen DeVaul as regular volunteers for the serving of the meal, which at times has counted as many as 50 people enjoying the meal.

The list of previous coordinators includes Squeegee Mills and Ken Sherman. Squeegee and Ken made a tremendous impact when they assembled a great and dedicated crew of volunteers shoppers, meal preparers, and meal servers which made the whole effort easy and enjoyable. Other churches and community service groups prepare meals on other days, meaning that the volunteers from FPCY are just one part of a larger group effort answering God’s call.

Typically, the meal consists of a ham and vegetable casserole (a whopping six large trays), a beverage and a delicious, home-made dessert often made by Tricia Dineen. The meal is prepared one day at the Peekskill Presbyterian Church (705 South Street) and then served the next day at the Peekskill Salvation Army (117 Nelson Avenue).

The upcoming meal preparation dates are February 10th, March 10th, and April 7th, with the meal served the following day. It is a good opportunity to connect with God, one another and the world through fellowship and service. New volunteers are always welcomed to help in any way they can as we all have busy schedules and many hands make for light work.