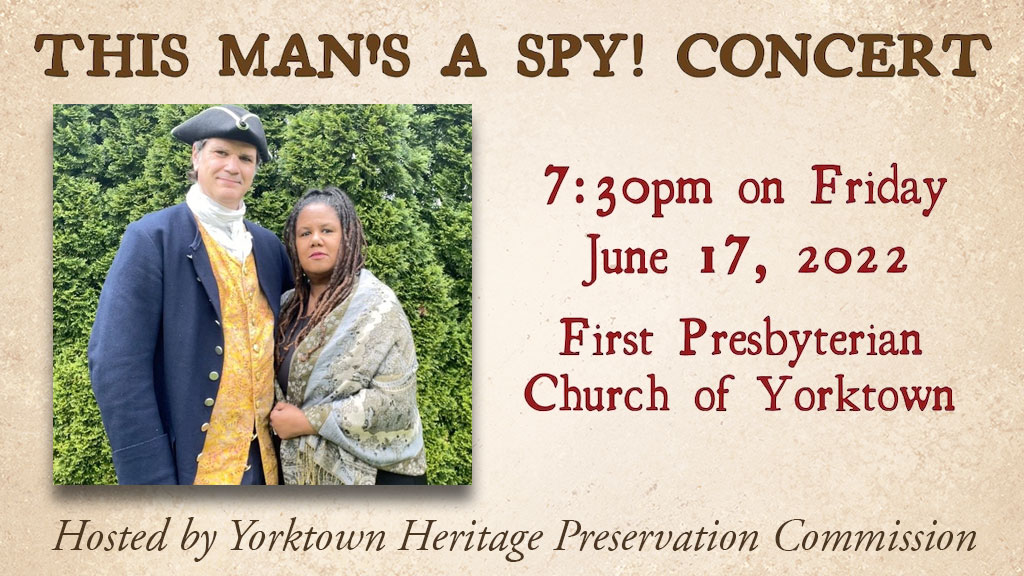 The “This Man’s a Spy!” concert will be performed at the historic First Presbyterian Church of Yorktown by local award-winning duo, Carla Lynne Hall and Jim Keyes, also known as Carla and Keyes, on Friday, June 17 at 7:30PM. The free lively evening of songs is appropriate for families, children ages 6+ and history enthusiasts as well. Carla and Keyes will be dressed in period costume and will be available afterwards for questions, discussion and photographs.

The lyrics tell the story of American General Benedict Arnold and British Major John André and their treasonous plot to deliver West Point to the British. The importance of the Arnold and André affair is remembered to this day. Had their plan succeeded, the British could have won the Revolutionary War.

The songs provide perspective for both Arnold and André, while also introducing other important
players of the story, including Peggy Shippen, Benedict Arnold’s wife, and local Patriot militiaman, John “Jack” Peterson, a free African-American man who helped thwart Major André’s escape back to the British lines. André was captured by three patriot militiamen, Isaac Van Wart, David Williams, and John Paulding in Tarrytown.

“This musical presentation is the continuation of what will be many events and commemorations,” said Commission Chair, Lynn Briggs. “Carla and Keyes have created a new perspective of the Arnold and André story that we are excited to share.”

Revolutionary Westchester 250 (rw250.org), under the leadership of President Constance Kehoe, was created in support of the United States Semiquincentennial Commission Act of 2016. New York State officially joined the national commemoration of the American Revolution in February 2022 with the passage of the New York State 250th Commemoration Act. Revolutionary Westchester 250 works to build awareness and appreciation of Westchester County’s critical role in the American Revolution.

RW250 launched this aptly named initiative—This Man’s a Spy!—co-chaired by Lynn Briggs and Bob Fetonti. This effort creates community awareness, understanding, and enthusiasm for the historical significance of this critical event in U.S. history. The Yorktown Heritage Preservation Commission/Yorktown 250, in conjunction with This Man’s a Spy! and RW250, is delivering a number of related activities in Yorktown this year, the location of several key Revolutionary War events. Local partners include the Town of Yorktown, Yorktown Small Business Association, Yorktown Historical Society, and the Yorktown Arts + Culture Committee. While admission is free, donations are welcomed.

In July 2016, Congress passed the “United States Semiquincentennial Act” in order to provide for the observance of the 250th anniversary of the founding of the United States, which is in 2026. Local, state, national and international activities are being planned, encouraged and developed to celebrate this birthday. Westchester County, and in particular, Yorktown, played a pivotal role in both the American Revolution and the founding of the United States, and passed a local resolution to honor the occasion.

The Yorktown Heritage Preservation Commission is pleased to partner with Revolutionary Westchester 250 (RW250) in presenting special events relating to the nation’s birth. The Yorktown Heritage Preservation Commission thanks the First Presbyterian Church for providing an historic and fitting location for the concert. The First Presbyterian Church of Yorktown is located at 2880 Crompond Road. To park for the event, enter the paved parking lot off of Route 132.

For more information on the Yorktown Heritage Preservation Commission, our Landmarks and our
Homes of Historic Distinction Programs, please visit our Facebook page and/or our webpage.

This article was prepared by the Yorktown Heritage Preservation Commission.