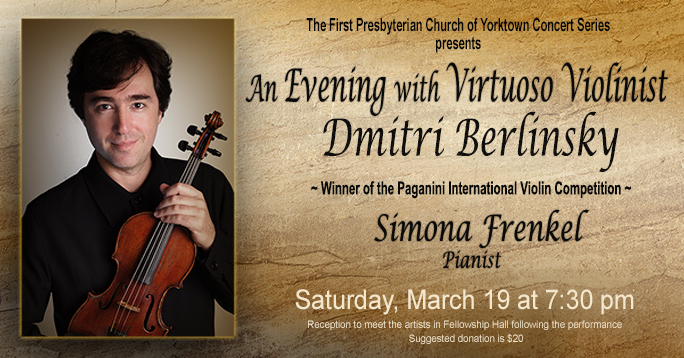 On Saturday evening, March 19th at 7:30, the Concert Series will once again present internationally known violin virtuoso, Dmitri Berlinsky with pianist Simona Frenkel in the fourth concert of our 2015­-16 season. We are indeed honored to again host Dmitri Berlinsky who is one of the most sought after concert violinists, ­­ and who is currently performing in Europe. Last year in February, Mr. Berlinsky’s concert for Yorktown brought a standing ovation and cheers from our audience, and was hailed as one of the most amazing concerts of the season. Mr. Berlinsky arrived on the international scene as the youngest winner in the history of the Paganini International Violin Competition. He made subsequent triumphs at the Montreal International Violin Competition (Grand Prize), the International Tchaikovsky Competition and the Queen Elizabeth Competition in Brussels which led to appearances with major orchestras in Europe, Russia, the Far East, North and South America. Mr. Berlinsky has performed in such major concert venues as Carnegie and Avery Fisher Halls in New York, Kennedy Center in Washington DC, Tokyo’s Suntory Hall, Great Hall of the Moscow Conservatory, Mariinsky Concert Hall, Leipzeig Gewandhause, Berlin Philharmonic Hall, and many other international concert halls. To learn more about him, check out his website: dmitriberlinsky.com.

They will perform music by Schubert, Manual de Fala, Chausson and Tchaikovsky. We are grateful again that Simona is able to attract performers of Mr. Berlinsky’s caliber and it is a reflection of her reputation as a versatile and established international performer. A reception will follow in Fellowship Hall, and a donation is suggested to help support the concert series.